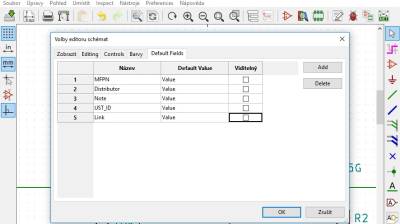 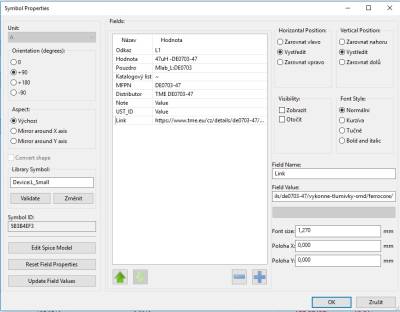 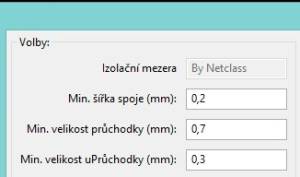 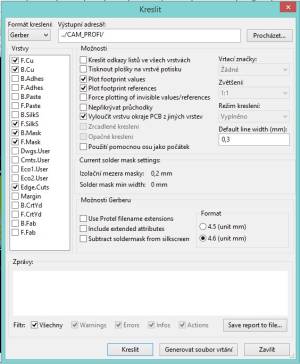 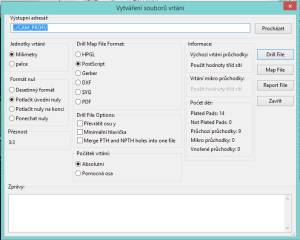 The list of mandatory actions serves as a quick check that you have not forgotten anything important. All the question should be answered either “yes” or “in this case intentionally no”.

Some modules are designed in this system - however, due to a necessity of having different directory structure, they are published in SVN database MLAB_E that does not yet have web listings. In the future, we do not expect further using Eagle for module design.

Eagle software uses different text fonts that a formerly used PADs, that is why its setting is slightly different. So far, the following setting seems to work best:

One module can contain more font sizes (usually less than 3 is enough). They are used in the following order: module name, labels, warnings, author identification. Different font sizes are of course only used in cases, when there is enough space on the module. Therefore, some modules only contain one font size, with respect to a good readability and module size.

To draw flat technical drawings LibreCAD can be used. In Ubuntu, it can be installed directly from the package (?? Z balíku):

FreeCAD is on the other hand well suited for a classical 3D modelling, known from many proprietary CAD software. It seems convenient to use its daily build, available from PPA.

OpenSCAD is a tool for designing 3D models of technical devices. In contrast with most of the design tools, OpenSCAD uses a programming language to describe objects. This approach allows models parametrisation and their easy versioning with an accurate identification of changes. A basic introduction into its using can be found here Know only 10 things to be dangerous in OpenSCAD. There is also an overview of basic functions.

In order to instal the actual version for Ubuntu 14.10 and higher, there is a PPA repository ready:

Openscad can be then installed using a following command:

The programme can be opened in the usual from dashboard or using command line.

For the newest functions to be available use the daily Openscad compilation:

It can be run from the command line like openscad-nightly, both versions can be installed in parallel.

To display the STL generated views in Nautilus, you can use stl-thumbnailer tool.

It is practical to follow some basic coding style rules when creating models in opens cad.

The editor integrated directly into OpenSCAD is not very comfortable for use. Therefore we prefer to edit the source codes of models in SublimeText 3 editor - you can install a plugin that recognises the OpenSCAD language.

The installation can be done through a system of packages that can be activated via Tools → Install Package Control... 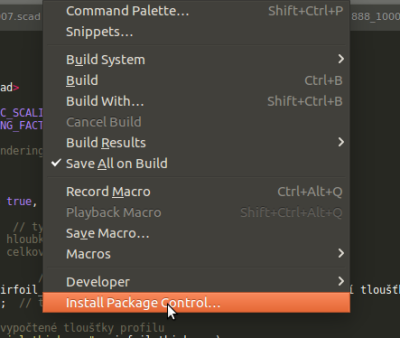 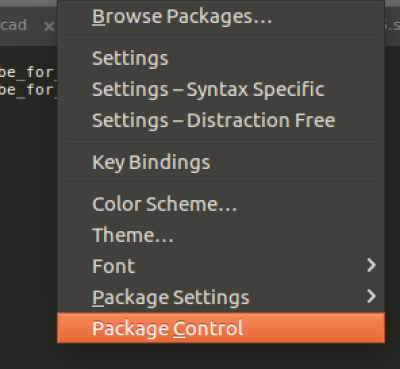 In the menu choose “Install Package” 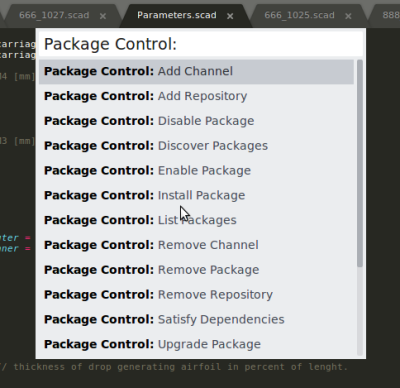 Write “openscad” into a filter field and click the proper package.

Now it is necessary to close and re-open the SublimeText so that the new configuration will be set. Then it is possible change the setting so that all files with .scad suffix will be opened with OpenSCAD syntax highlighting. This setting can be done via an option found in lower right corner and choosing Open all with current extension as.. → OpenScad 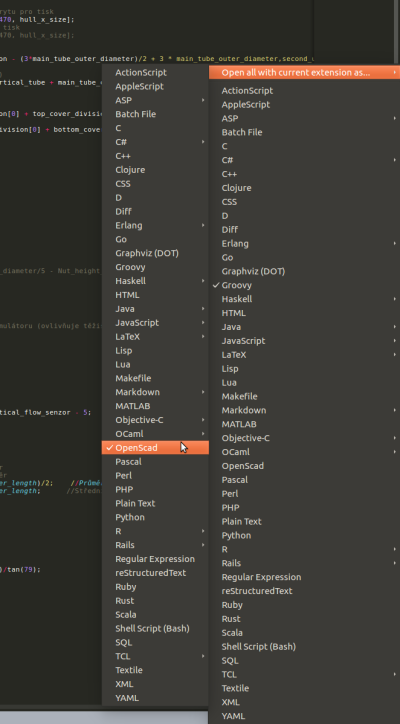 During the following opening of any .scad file, it will be automatically recognised as a OpenSCAD source file.

To view the generated data, there are several tools available:

In order to merge your data, you can use gerbmerge software - there are several different development branches on the Internet. When you want to use it with kicad software, it is convenient to use a relatively new development branch prof. Karl-heinz Kunzelmann. It is base on the first version 1.8 and other adjustements. It differs significantly from a gerbmerge3 version, which on the other hand has a cleaner source code.

For gerbmerge software to function properly, it has to have a set way of paneling (způsob panelizace). This is done via a configuration file - an example of such file can be found in programme source code (it also contains commentaries explaining its usage). If we have a prepared configuration file, e.g. layout-mm-3.3.cfg, we can run the gerbmerge.

The programme will try to find an optimal motives’ layout on panel according to a chosen configuration and it will generate merged files.

An example for merging SET10A (the installation is the same as the previous example). First, it is necessary to get to the place with the set data:

Setting of set merging is found in the layout.cfg file and the placement.merge.txt file contains the requested set layout. A file with set layout will be generated automatically during the first startup of grebmerge programme.