ARM architecture is currently developing rapidly, especially thanks to its excellent computing power with 1 W power consumption in contrast with obsolescent and more complicated Intel Ix86 architecture. This situation has been achieved over the last few years mostly thanks to its massive deployment in devices like tablets and telephones.

There are several computing machines based on this architecture suitable for developmental applications.

There is already a large number of computers of this kind - this section summarises the most interesting ones that had been tested in MLAB or applied in some of our designs.

A slightly more robust variant with a slower processor compared to odroidu U3. For more detailed description see odroid-c1. 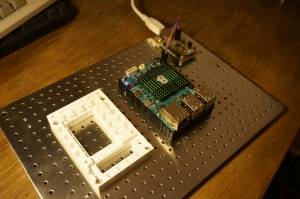 It serves as a substitute for ODROD-X2 that is no longer produced. They have more or less identical parameters, only the PCB is smaller in size and some of the interfaces are no longer present. For more detailed description see odroid-u3. 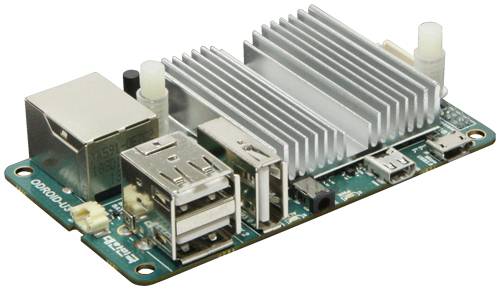 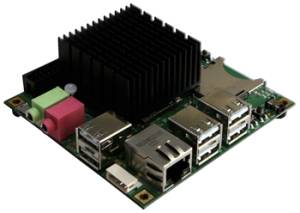 It is one of the first quadruple-core Cortex-A9 MPCore ARM computers with cores operating at frequencies up to 1.7 GHz. Operation memory 2GB is of PoP type and thus is soldered directly on the CPU chip. For more detailed description see odroid-x2. This computer contains GPU that does not yet support OpenCL.

This development board is no longer produced. As a substitute it is possible to use ODROID-U3.

In reality, this computer also has CPU module placed on a separate PCB connected by connectors. The module is glued by epoxide to the main board - a concept similar to EOMA-68, only the CPU module cannot be replaced. 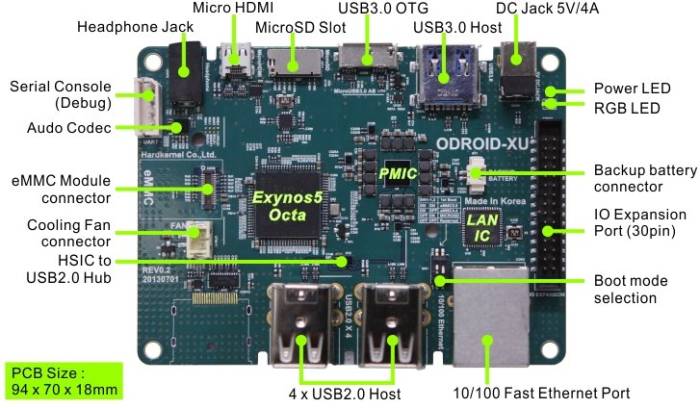 Technically speaking, it is a successor of Odroid-X2 board with a newer CPU 4x Exynos5 Octa Cortex™-A15 1.6Ghz and 4x Cortex™-A7 - all of the 8 cores integrated into one chip. Both types differ significantly in computing power and thus in power consumption. The original idea behind this concept is, that the planner will decide about the usage of cores with low computing power or more powerful cores for running the system (thanks to integration of both CPUs in one case, the tasks can be transferred quickly between the cores). The GPU PowerVR SGX544MP3 already supports OpenCL 1.1 and moreover, there is a USB 3.0 available on the board - an advantage especially when connecting newer versions of SDR receivers.

Hardkernel sites - this board has not yet been tested in MLAB. It has an disadvantage of having an active cooling carried out by a fan, so the computer will not be completely noiseless. There may be problems with fan degradation and a spreading of vibrations. 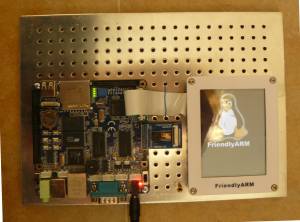 An older single-board computer, which has been used in combination with MLAB brick system in several robotics projects. For more information see Friendly ARM

Parallella is a hybrid computer with ARM and FPGA. Furthermore, there is also a Epiphany III coprocessor placed on the board. The whole device is especially suitable for signal computations. 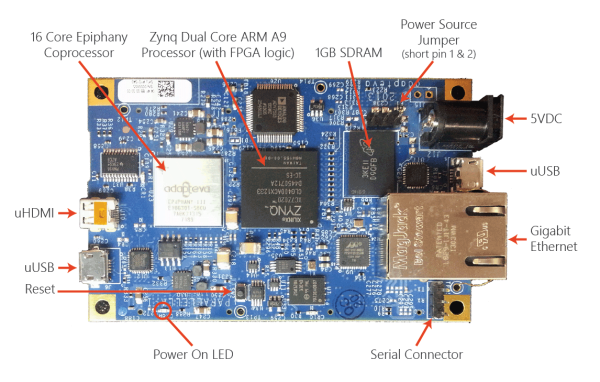 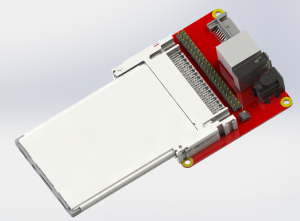 It is a concept using a physical specification of PCMCIA card. It is advantageous in that new ARM circuits are usually in BGA package that needs a multi-layer PCB, making the small-scale production of such devices very expensive. EOMA-68 specification solves this problem by enclosing such PCB to a former PC Card format and leads the peripheries out in a standardised pin-format. Such card can be then used for various hardware realisations and can be produced in larger quantities, making the whole production process cheaper - for the end product, in which the card is implemented, two-layer PCB is sufficient.

Realisation on this concept: 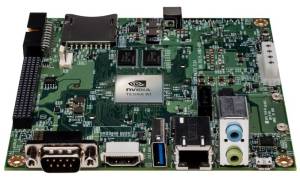 Jetson TK1 Development Kit is a development board suitable mainly for CUDA and OpenCL testing on embedded devices. It is special in that it has an integrated powerful GPU unit. Furthermore it has Half mini-PCIE slot ports led out, but it does not have I2S for audio input.

All of the above-mentioned computer contain I²C bus, which makes it easy to connect various sensors or some simpler actuators. Furthermore, it commonly contains serial link that makes it able to connect GPS and accurate time synchronisation .

A problem common to all the computers is a mechanical construction that is incompatible not only with MLAB brick system. Another issue is a production instability - most of the computers will not be produced the following year, or at least not in the above-mentioned configuration. Therefore, it will be useful to create an own open-source solution to computing hardware that can be used to build a network of detection and measuring stations.

Efforts to accomplish such goal are mentioned in open hardware list of computers.

ARM modules for MLAB are limited only for ‘small’ ARMs’

There is also a module for low-power-consumption ARM L150.

In combination with SDRX01B modules, an integrated SRD receiver in UNIBOX01 box can be built. It only needs a monitor and a keyboard or possibly a module with endless knob.

ARM computer can be used in AWS01B construction.