An autonomous weather station with its own auto-diagnostics. The station is designed to work in remote areas together with other scientific instruments like robotic telescopes or other measurement stations.

Very common problems of such applications are scarce energy resources and a need for short-term data transmission occurring after long time intervals. As a result, a possibility of immediate failure report via short-band data channel is essential in order to minimize dropouts in data acquisition.

Apart from these technically still unsolved problems, there are other reasons to design such station - most notably an absence of serious OpenSource-hardware solution for meteorological data collection providing data for OpenWeatherMap network. 1) 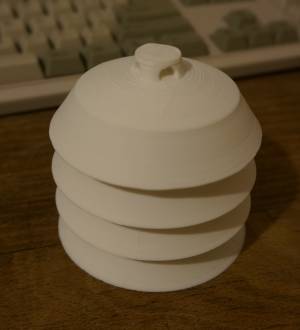 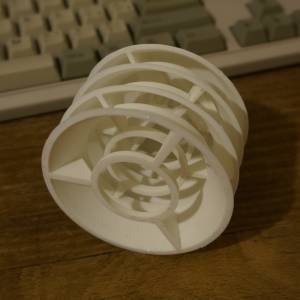 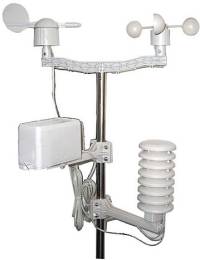 The anemometer generates impulses with period inversely proportional to the wind speed. Easy reading via pulse counter and timer.

Wind speed measuring requirements are met with 1Hz sampling or upon the impulse arrival (in the case of very low wind speed or failure). 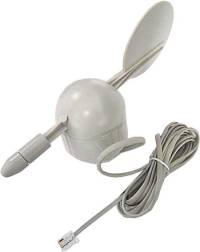 Weather vane with wind rose serves as the most basic wind detector. The position of the vane is read by a reed switch and it is recorded when it changes.

Can be solved by using more sophisticated anemometer designs that measure vectors (for example ionization or sonic).

A traditional tipping bucket rain gauge generates impulse upon tipping of the lever. As it does not occur very often, it is recommended to record the precise moment of tipping in order to assign the precipitation a more accurate position in time.

The rain gauge should be equipped with heating and temperature sensor for ice melting regulation.

According to requirements of a weather station operator, a wide variety of snow parameters can be measured. 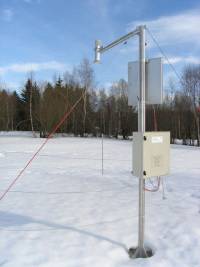 Snow cover can be measured by a rangefinder (ultrasonic mostly), which measures the distance from a defined height perpendicular to the ground. Another option is to use an optical triangulation sensor.

In the case of acustic measurement, ECHO01A construction design can be used.

Some of the snow's mechanical properties, like hardness and stiffness, can be estimated using the reflected signal of the ultrasonic rangefinder. Using the optical rangefinder, on the other hand, can reveal other properties like reflexivity of snow cover or its spectral dependence.

A total weight of snow cover constitutes an important information in terms of security risks. It can be measured using a reflective plate placed under the snow cover height sensor. At the same time, the plate can act as a weight.

SHT25V01A - sensor with I²C output and optional self-testing by heating of the measuring element.

Self-test in pseudorandom time serves as a diagnostic tool.

Measuring the temperature of the air, although being one of the most important function of the station, is in some cases performed incorrectly - e.g. by letting the Sun influence the value. A solution to this problem is so-called radiation shield, which prevents the effect of radiation on the sensor.

A laser ceilometer can be built from already existing modules.

Use of a photovoltaic cell, measuring output in W/m².

Possible to measure with ISL2902001A sensor.

Measuring the intensity of ionizing radiation with GM or semiconductor detector.

Measurement of water level and flow.

The weather station has several possibilities for interfaces to connect and communicate with other devices.

Modules RS232SINGLE01A or TTLRS48501A with microcontroller are suitable to establish a connection depending on the application complexity.

One of the most universal methods of connecting the station is to use a router with OpenWrt OS. It enables the use of both, ethernet and Wifi and even other interfaces in the form of modems, which can also connect to router via USB.

The weather station communicates with router via I2C bus. The bus can either lead directly form the router or through I²C to USB connector.

With an advantage of lower power consumption and simpler design a module fitted with ARM STM32F10xRxT01A and ethernet module ETH01A can also serve as a communication interface.

In this case, the entire device acts as I²C to USB converter, with reading from individual sensors implemented by program running at USB HOST device. The advantage of this design lies in possibility of obtaining relatively precise information about an absolute time in which the values were measured. Furthermore, changes in software and configuration can be done simply by updating the control program without a risky firmware replacement.

The weather station is connected via USBRS23201B, which creates a virtual RS232 interface.

See the use of wifi router with OpenWRT.

GSM01A module is suitable to transfer data via GSM or 3G/4G.

ISM represents an industrial, scientific and medical band where license for data transfer is not required. MLAB already contains several modules enabling the use of this band.

Reading of the measured values

This design offers a possibility of connecting variety of sensors, which are initialised at every station startup. It uses I²C bus with I2CHUB02A module and predefined set of sensors.

Probably currently the best method is a direct reading of sensors from a master system via I²C as there exist quite a lot of old unused wifi routers able to connect I²C directly.

Lukáš Mičan from Robozor club has programmed handler program, which periodically reads the weather station sensors and sends the data to OpenWeathermap.org.

The program is written in Python and uses pymlab library to read I²C sensors.

Involves failures that may arise from defect material or its fatigue due to environmental effects (involving UV radiation, temperature cycles,…)

Damage to anemometer can involve breaking off one or more blades or rotor. These events should be detected by measuring an uneven speed during one revolution

Relates to the sensors measuring:

Ideal output data should be compatible with one of the already used meteorological data protocols:

Data output should also include accurate time record of measurement - time information can be obtained via GPS01A. In order to integrate the station into more complex project its output should support more bus systems (USB, CAN, RS232, RS485, Ethernet).

The following list contains some of the most widespread Open-Source programs for local data recording and processing.

Our ideal program should be multi-platform with minimal operating requirements and with possibility of sending data to one of the global network of weather stations. The data should be, at the same time, locally backed up and they should be able to combine with data from other stations. Examples of such database include: DB-All.e or NetCDF.

To measure a relative humidity and air temperature we use a SHT11 sensor soldered into universal PCB and SHT25 sensor in SHT25v01A module.

Reading is carried out by two timers - one (timer1) is clocked by a crystal and second (timer0) counts the impulses.

Meaning of the variables is as follows:

The firmware can be updated without any special utility only by sending HEX file with firmware to serial link of processor when it expects the firmware and writes:

This condition occurs after resetting the device.

Following that, a new firmware can be send using a command listed below (either under root account or under account with access to the serial line)

Ascii-xfr program is a part of minicom package in Ubuntu. In order to monitor the data recording, it is possible to listen at the same port: