Trace: • ESA Summer of Code in Space 2016 - Idea List
Translations of this page?:

MLAB is an open-source hardware and open-source software project which makes effortless design and construction of various measurement devices available for scientific purposes. There already exist several space and astronomical measuring instruments in MLAB projects. The Czech Astronomical Society is also involved due to the quality of data captured by our instruments and sets up a data storage server space.astro.cz for data collection from measuring stations. We want to improve our designs by software development supported by European Space Agency.

Although robotic telescope systems are in development for more than ten years 1)2), the currently most advanced Robotic telescope system RTS2 lacks a technology which would allow a large scale deployment on multiple observation sites. Therefore reimplementation of existing robotic system software for use in autonomous telescope network is needed.

Robozor project is a network of robotic telescopes which can communicate together and plan observation according to the best conditions. Robozor network is controlled by AROM software.

AROM (autonomous robotic observatory manager) is a set of programs (nodes) for control of instruments of autonomous telescopes such as mount, camera, spectroscope, meteo station, roof, switches and etc. All software should be programmed in Python or C++. Knowledge of these programming languages is necessary for participation in this project. 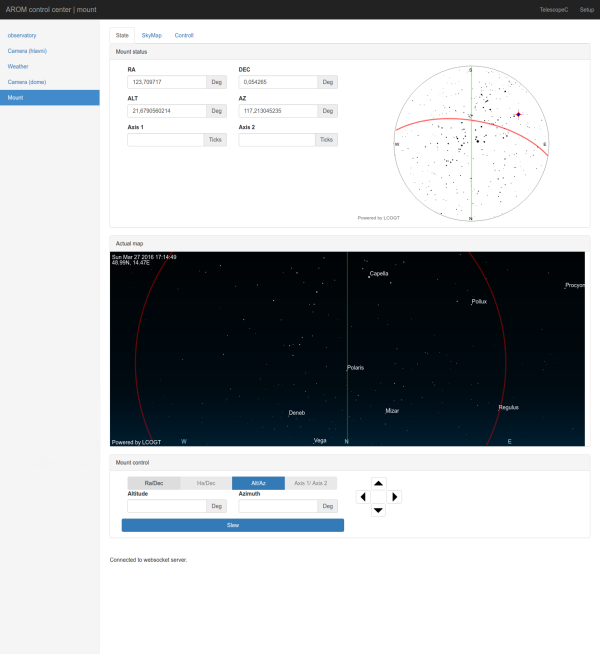 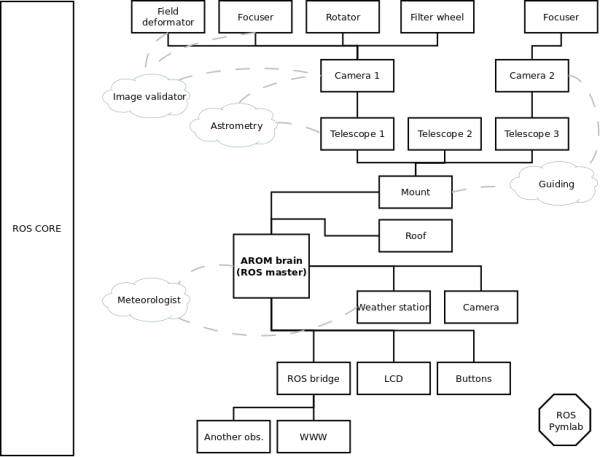 The main goal of this software is to provide a comfortable platform to observer which allows telescope control without the need to solve problems with software or hardware.

There are several tasks for SOCIS participants in the summer 2016 - it's up to the participant to choose one. Following is a brief description of problems and a description of an initial task for qualifying for other tasks. If you are interested in the tasks presented here please do not hesitate to contact us at bolidozor@googlegroups.com, we will send you technical details or help you with your deal.

The student has to adopt AROM’s simple one-site scheduler which will be choosing targets by Altitude. The observer only specifies which objects he wants to observe. The system must reorganise targets in target list according to the highest altitude at a given observation time. Target could be any of above mentioned astronomical or space objects. This task will demonstrate student's basic astronomical and programming skills.

Advanced scheduler is necessary for the fully autonomous mode of the telescope. It should distribute the observing time according to target altitude, weather or time range (e.g. for variable stars observing). Advanced scheduler should be shared by multiple stations which could be in a stand-by mode and at the same time it processes weather conditions in order to start a robotic observation. Target list is stored in a shared database containing predefined conditions for observation of every object.

Expected result is an AROM node which will optimally organize observation list and synchronize target database between AROM systems in Robozor network.

Camera is one of the most common instruments in optical astronomy. Therefore AROM needs quality drivers for various cameras.

The student has to create AROM driver (node) for getting data from meteostations equipped with open-source WeeWX software which could simulate a meteorological station. This task will demonstrate student's basic programming skills. Student should have experience with calibration and processing of astronomical images.

Driver must be an ROS node. AROM scheduler (or observer through web AROM control center) sends a standard message and camera driver should execute it. This node will also be responsible for control of built-in camera accessories or external accessories with own drivers (nodes).

The student has to create a software for fast recognition of stars in FITS fields (images). A third-party open source library could be used, but student must show his own knowledge and code contribution to the existing solution.

Video guiding AROM node will request an image from camera driver and it will calculate a position and delta error (vector of movement from last image) of the stars. Absolute mount calibration or accurate slewing image can be processed with astrometry.net or similar software.

Telescope accurately tracking stars and choosing the best target for tracking. After slewing or after losing the target it should measure its position using the astrometry and correct the differences.

For further information we strongly recommend you to contact the project coordinator Jan Chroust (jacho@mlab.cz)