RMDS01A device is the basic SDR receiver set for radio detection of meteor trails. Compared to other methods, its main advantage is in fact, that it uses software-defined receiver, that enables various advanced signal processing techniques. 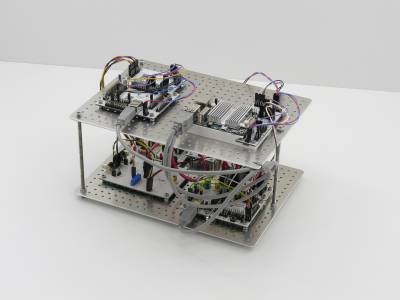 The advantages of using signal from military GRAVES radar, compared with the conventional observations using TV transmitters, include the stability and enormous power output of military system transmission. This makes it possible to utilize it almost through the whole Europe.

Most of the used components come from MLAB brick system project.

This is the most basic antenna for receiving the signal reflected from ionized trails. It has an advantage in having a small size, so it can be installed on balcony, terrace etc. Its simple construction enables easy assembly and this makes it particularly suitable for beginners.

The main drawback is the emitting characteristic, that has a sharp zero in zenith. This causes a poor detection of meteors flying directly over the head in comparison with conventional visual observation.

An interesting antenna construction, that could eliminate the disadvantages of GP antenna is so-called eggbeater or antenna of Turn style type.

Other interesting experiment could include the use of two crossed dipoles over conducting plane. This would probably enable the integration of amplifier directly into the antenna and the creation of the active antenna with better noise parameters and reliability than separated assembly of GP antenna and LNA.

The Discone antena has also been tested for receiving of the reflected signal. It works, but its high wideband characteristics causes the unwanted signals to penetrate in band as well.

High quality preamplifier is necessary to operate with 1/4 Ground Plane type of antenna due to low gain and low intensities of reflected signal.

LNA01A is preamplifier constructed for meteor detection in 2m band. It contributes to amplification of the signal form antenna and so it lowers the significance of receiver's own noise. In addition to that, it also minimizes the complications connected with coaxial cable signal transmission through compensation of cable damping. It is than possible to use cheaper coaxial cable of RG58 type.

Optimal to use are MLAB standard screw coaxial cable connectors of SMA type that are more durable and have better electrical characteristics that other connector types (like BNC, F).

It is not recommended to use BNC connectors due to their low resistance against bad weather conditions and not satisfactory electrical parameters, damping, conductivity, electromagnetic leakage, etc.

Suitable to use is any high quality 50 Ohm coaxial cable with good shielding, that prevents the noise (for example from PS) to enter the receiver other than through antenna. We usually use cables of RG58 type, specifically for example RG-58U/96FA. Better quality cables are available as well, for example RG-58-EKH-155 or LMR 195.

It is recommended to use minimal necessary length of coaxial cabel, to prevent unnecessary loss of signal in the lead.

Software-defined receiver developed primarily for radioastronomical experiments, its characteristics are more than sufficient for meteor detection as well. For more information about the receiver see SDRX

It is possible to utilize the computer audio card with stereo imput for digitalisation of low-frequency signal from receiver. Important audio card parameter is a good s/n ratio (at least 80dB). Concerning sampling frequency, it is possible to detect meteors with 48kHz sampling, though it leads to fall in station resolution.

Due to relatively high requirements put on the quality of the sound card and its high cost, there are lately tendencies to switch to some self-made digitalization hardware.

The software configuration consists of two steps. The first is to tune the receiver to a frequency of GRAVES radar transmission and the second is to sett the meteor detection for receiving bandwidth.

You can use USB frequency synthesizer with CLKGEN01B module as a local oscillator (LO). There are different ways to handle the LO depending on the detection computer OS. After installing the necessary software it is necessary to tune the LO to a frequency close to the one of GRAVES transmission. Most commonly we use lower frequencies than the carrier radar frequency (for example 143.039MHz).

When tuning the LO, it is sometimes necessary to check its correct calibration. One option is to use the VOLMET network, available in Prague at 125.525MHz (for other places see list of frequencies. All of the aviation transceivers transmit with AM-NSC. As a consequence it is possible to calibrate the LO to carrier frequency even when the modulation itself is incomprehensible.

The picture shows the signal tuning to 125.525MHz. LO is tuned to 125.515 and the signal is visible at approximately 10kHz in audioband.

There exist only a few software tools for meteor detection in SDR receiver signal. The simplest way to begin the observation is to use SpectrumLab program and ready-made configuration file.

If you digitalize the sound card signal and use SDRX01B receiver, it is recommended to tune the local oscillator to 143,0398MHz. That causes the radar signal to have the frequency of 10,2kHz, which is the value used in configuarion file (Needs to be saved as text file with .USR file format), that searches for the meteors at this frequency.

SpectrumLab for on-line data processing is available at configuration file (Needs to be saved as text file with .USR file format). It automatically detects meteors at audio frequencies between 10500Hz and 11000Hz. It assumes SDRX01B receiver with LO set to 143.039250MHz to detect reflection form GRAVES radar.

The path for saving the pictures, can be set in “condition actions” window, “screen capture” tab. 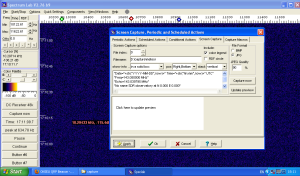 Be careful when entering the path, as “D:\capture\meteor” means the file where “D:\capture\” will be saved and the suffix of file “meteorXX” as well.

Moreover it is advised to fill in a suitable name of the site and coordinates of observation. 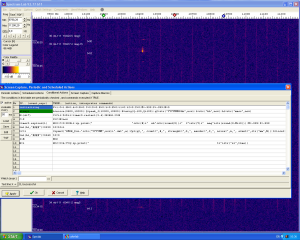 The principle of its function lies in choosing an average value of noise background from frequency range 9800-10200Hz and comparing it with the expected GRAVES radar transmission intensity (10300-10900Hz). If it finds here an increase in signal intensity (by approximately 20dB), a meteor is detected. A point is marked at spectrogram, recording the second of detection (counted from the beginning of the last minute), its ordinal number in given hour, measured level of noise background, the frequency of detected maximum and its relative magnitude calculated from radio reflection intensity.

For the measured data to obtain a meaning, it is vital to share them with other observers. Several worldwide databases have been created to serve this purpose.

You can publish the date at RMOB.org with a help of their specialised program Colorgaramme, able to periodically send the data to their web.

Astrozor is a web page gathering information about Astronomical observation stations. It is advantageous to register your detection station here, so the other users can learn about their existence.

The sensitivity of system has not been yet experimentally tested, because of the missing data from other sources that can be used for comparison. Sensitivity is also affected by various signals - meteory rusenie

The station receiver stability of frequency depends mainly on the temperature of LO. The following picture shows the temperature dependence resulting from the measured frequency deviation. The change in the frequency has been observed using the whole system with sound card SoundBlaster USB External 24bit live. 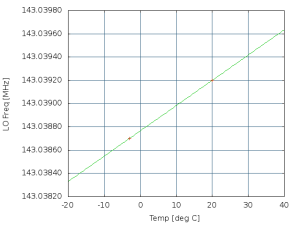 We have used Asus EEE, that is particularly suitable as portable detector.

The equipment should be improved with better signal digitalisation method and synchronisation of LO using GPS receiver. 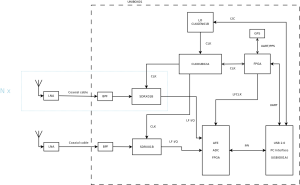 The use of GRAVES radar as a transmitter for meteor detection is on one side very effective when learning how to operate the equipment, but on the other side, its parameters are not sufficient for further development and advanced signal processing (with the aim of calculating the vector trajectories of meteors).

LO of the receiver can be synchronised with GPS receiver or it is possible to mark the signal samples with the exact time. This methods enable the calculation of meteor trajectory and subsequently the land site as well.

Synchronisation and the trimming of LO can be managed using FPGA S3AN01A and GPS module GPS01A.

Trimming of the LO furthermore enables to reach a good temperature frequency stability of the system.

A portable version of receiver (with accumulator power source) is suitable for field mobile meteor demonstration, as an addition to optical observation (for example at summer camps)

demonstration of such application

Receiver and detection station, integrated together to form one whole, would lower the total power consumption of detection apparatus and would increase the reliability as well.

The signal processing requires relatively high computational power. For this reason it is beneficial to make use of multi-core solutions. An example of such solution is following: ODROID-X2

Another advantage of autonomous system would be the possibility to use compact power backup system, eg. with the help of LION2CELL01A module or completely autonomous power supply made of solar cells module SOLARMINI01A.

The receiver could include high-speed circular sample buffer, that would be saved permanently in the case of event.

It would be possible to handle the calculated impact ellipse as a geocache target.